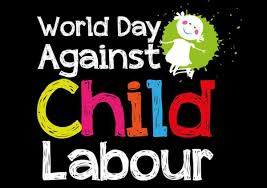 On June 12 every year, the World Day Against Child Labour is witnessed all over the world to raise awareness for the prevention of child labour. Children around the world are routinely engaged in paid and unpaid forms of work. However, they are classified as child labourers when they are either too young to work or are involved in hazardous activities that may compromise their physical, mental, social, or educational development.

This year’s focus is on ‘the impact of the crisis on child labour’. The COVID-19 health pandemic and the resulting economic and labour market shock are having a huge impact on people’s lives and livelihoods. Unfortunately, children are often the first to suffer. The crisis can push millions of vulnerable children into child labour. Already, there are an estimated 152 million children in child labour, 72 million of which are in hazardous work. These children are now at even greater risk of facing circumstances that are even more difficult and working longer hours.

As it stands, the COVID-19 pandemic has plunged the world into a crisis of unprecedented scope and scale. The harmful effects of this pandemic are expected to be most damaging in the poorest countries and those in already disadvantaged or vulnerable situations, such as children in child labour and victims of forced labour. Almost one in ten of all children worldwide are in child labour. While the number of children in child labour has declined by 94 million since 2000, the rate of reduction slowed by two-thirds in recent years. Target 8.7 of the UN Sustainable Development Goals calls for an end to child labour in all its forms by 2025. How can the world community get firmly on track toward eliminating child labour? 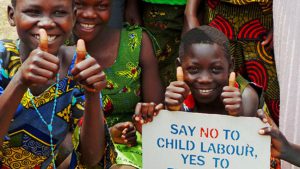 The UN General Assembly has urged the international community to step up efforts to eradicate forced labour and child labour and declared 2021 as the Year for the Elimination of Child Labour.

There is no trust more sacred than the one the world holds with children. There is no duty more important than ensuring that their rights are respected, that their welfare is protected, that their lives are free from fear and want and that they can grow up in peace. – Kofi Annan